st. mikuláš (nicholas) eve, celebrated on the evening of the fifth of december in many european countries, is nice, but a holiday i don’t yet quite understand. we have nothing like it in the U.S. i asked a czech friend, “so it’s like santa visiting?” to which she replied, “no, we have that on the 24th when jezizek visits”. so basically, it’s a freebie christmas holiday. chalk up another reason why celebrating the holidays is wonderful in europe.

i know in germany, st. nikolaus visits and puts fruit, sweets, nuts, and other treats in the shoes of good children. well, here in czech republic, it’s a bit different!

the fifth of december in czech republic is a HUGE event! bigger than the christmas tree lighting ceremony. i visited with my friend petra and her two daughters, marketa and zuzka (who are my favorite kids, love them). hundreds and hundreds of people were flooding into the square from every direction to see an angel “float” from the black tower (české budějovice landmark) on a zip-line across the entire square, showering the crowd with angel dust, or a magic spell or something like that. 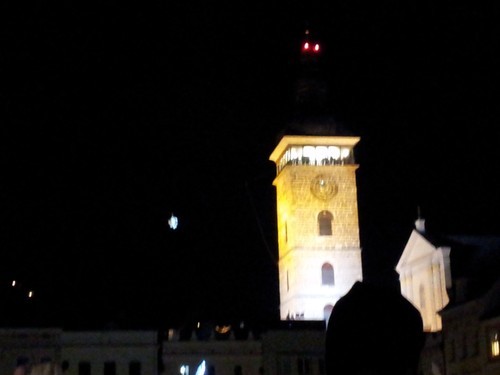 finally, when the angel finally made it, he lowered to the ground and a GIANT angel appears in his place. he marched up to face the thousands of people and made a speech, something to the effect of encouraging children to be on their best behavior, but also to have a wonderful christmas. i picked out some words i knew from the speech (krasny, darky, vanoci). that i repeated to marketa, who gets a kick out of when i try to speak czech, especially since i don’t do it very often! (one must speak english when hired to speak english, or so i’ve been told) 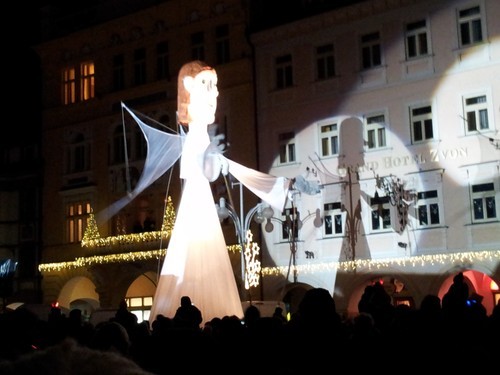 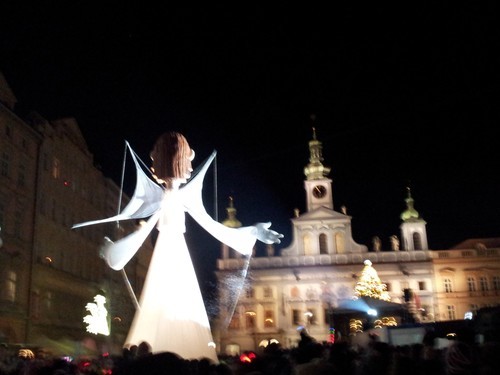 eventually the giant angel slowly made his way walking around the entire square. now, this angel was HUGE! and was throwing more magic dust into the crowd. it was one of those sights that just makes you smile in spite of yourself. truly an original experience!

while the angel is making his round, the devil and st. nicholas (normal size people) are making their round to the children in the crowd. the devil (whom most children are absolutely afraid of just at the mere sight of him) taunts the children that he will take them to hell with him if they are bad. (really.) then the st. nicholas and a smaller version of the angel make the child feel better and give them sweets. zuzka would almost start to cry whenever she saw a devil running around in the crowd, to which we’d try to distract her: “look at the pretty angel!” 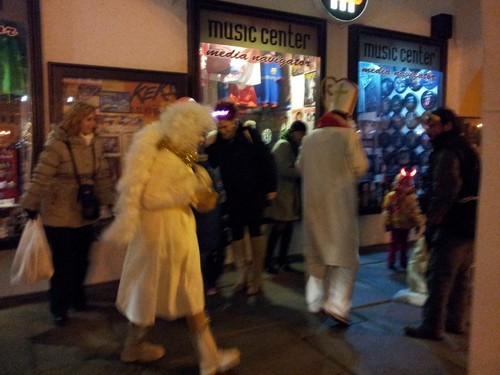 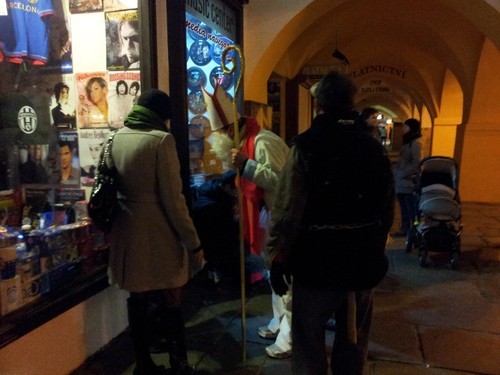 (above, a couple kids about to get the st. mikuláš-angel-devil treatment)

i spent the rest of the evening drinking svařek, walking around the advent market, eating halušky, trying unsuccessfully to find other people i knew in the crowd, and watching a great band perform on the stage– they had a bit of an audioslave sound to them. then finally when my feet felt like two over-sized ice blocks (despite the preventative measures of two pairs of socks and a pair of tights), i lumbered on home. really glad i could witness the truly czech happenings of mikuláš this year.

happy snowy st. nicholas weekend! stay out of the gusts. 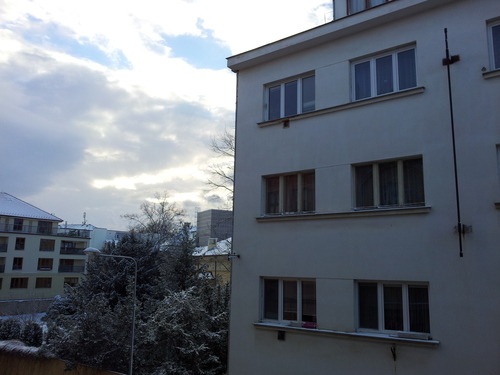 May, Lately + More Thoughts of Traveling “These Days”