i’ve kayaked once, in seattle’s lake union with my friend julie. the water there was blue, the paddling was hard– after a few minutes we both sort of just stopped because it was getting in the way of talking! but in a lake you feel very protected. after hearing kayaking stories from alex’s boss, marketa, i was determined to kayak in the stockholm archipelago!

which is good…. because on a tiny island, there really isn’t a lot more to do! there’s as much walking and sunset watching as you can handle, but i really wanted to do something a bit adventurous and memorable. 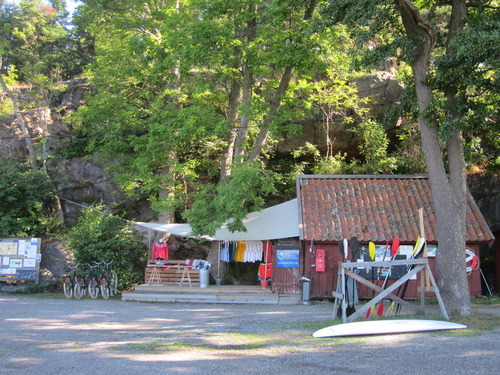 i asked at the cute little surf shack what the best usage of two hours in a kayak is. surprisingly, it was kayaking around the entire island, which could be done in less than two hours time. that could sound daunting, but i knew grinda was a very small island, nothing like in the san juans. and with my prior experience with boats in the northwest, it was no big deal! we chose a double kayak, and set out. 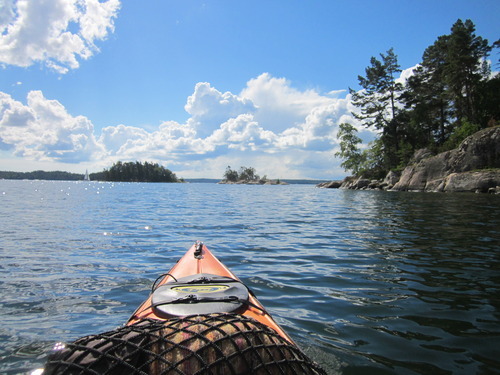 the feeling of kayaking in the ocean is an intense thing! the ocean is huge, you are small, and the baltic sea is pretty dark… even black at times. i forgot about alex’s fear of dark/deep water until about halfway through…. and asked him if he was doing okay. his response: “TRYING NOT TO THINK ABOUT IT!” have to hand it to him– he knew i wanted to kayak and was going to put aside his nervousness to try something new.

despite our collective limited experience, together we could cruise and keep pace with the best of ‘em, even though i was definitely working for it. what a wild experience. 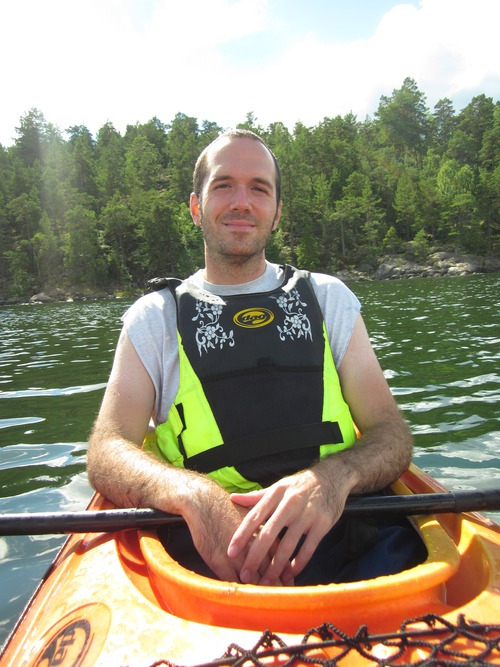 the only nerve-wracking part was going around the south-western area of the island, where ferries come in more than once an hour. as i am not a big fan of wake, i wanted to paddle the heck out of this area before any big boats came. the ferries, fortunately, are not as large as the WA state ferries as they don’t carry cars on board. we did get caught in a bit of wake from another similar sized boat (drats!) but kayaks do better than larger row-boat sized vessels in a big wave situation– staying on top of the waves instead of being crashed against, which can cause a bigger tipping hazard.

by the time we approach our starting point on the west side of the island again, i am simply amazed that we have had such a worry-free paddle with one complete beginner and one amateur on board. the sun was bright and warm, and we headed towards the beach. somehow, we picked up great speed on our return to the beach and somehow poorly judged how early to turn in. GO LEFT, GO LEFT! i yelled shortly before realizing that it was inevitable we’d run into this giant patch of reeds– and ducked. after the “short cut” through the reeds (gah), we lurched violently against the beach.

still in a bit of shock from having dodged all those reeds unscathed, i remained at the front of the kayak, spacing out. apparently alex didn’t need any moment for reflection. he decided it would be the gentlemanly thing to do to get out of the kayak first and help the lady to the beach. unfortunately, kayaks are sort of a “first in, first out” vehicle. being closer to the shore, it was actually my responsibility to slowly get out and pull us a bit on to shore. i did not, however share any of this information with alex, perhaps judging him to be an okay boater since our paddle went so well– giving him the benefit of the doubt. so when he stood up and put one leg on land, over we tipped. my first inclination was to get my camera out of the boat and on to land as quickly as possible, so i chucked it onto a sandy grassy patch on land.

not the most fabulous ending to a great paddle, but it was a memorable one. i guess if we had to tip, it’s best to tip when you are right by the beach? it is still up in the air if my camera still functions, but i did manage to get some good photos before the incident!  and it truly was a wonderful time. if not the tip, i’d have nothing to write about besides how gorgeous it was. it really reminded me of home. 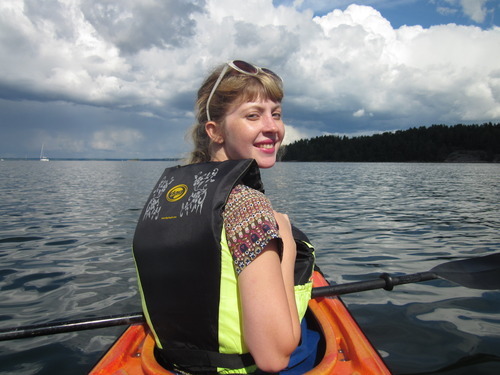 a scant twenty minutes passed after we finished kayaking did the sky just open up and tear grinda island a new one. we received a hailstorm like i’ve only seen a couple times in my life, accompanied by thunder and drenching rain. i felt pretttty good and smug about my extensive weather research for that morning– it was clear to me in the three mornings i’d spent on the island that mornings are definitely the best weather out in the islands, and afternoons the worst.

before the journey, i specifically wanted a double kayak, as i remembered the difficulty paddling last time and thought it would be helpful to have a strong man help me out! now i realize why marketa calls them “divorce boats”! to our credit, we really had no issues until the tip, and i would probably choose it again, although it would be nice to try out a single for a change sometime. i’d definitely recommend kayaking while in the stockholm archipelago– so many interesting little islands to check out and the feeling of floating together in the baltic sea made for a great memory. 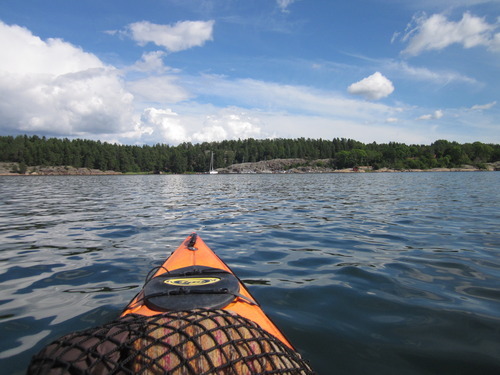 The Saturday of Summer