It’s time for my annual spooky film list for Halloween! If you’re just tuning in, every October, Alex and I draft up five films that are not the typical Hocus Pocus (however beloved that movie is) – something we have not seen tens of times that still has the spooky Halloween vibes many of us are craving at this time of the year.

Especially this year, there’s been a lot more time on your hands and far fewer events to go to, making this Halloween a perfect one to sink your teeth into a proper spooky, atmospheric movie. I hope you find a suggestion here for your watching pleasure that you haven’t seen or have never thought of. Rated on a ghost metric for Halloween suitability, not necessarily for the total quality of the film.

There can be no October that goes by without a film starring Vincent Price, and this one might be one of the best! Filmed in 1971 right in that sweet spot, in my opinion, the glory age of American film. In the story, a reclusive doctor seeks revenge on a team of nine doctors whom he considers responsible for his wife’s death. Fans of Fincher films (especially Seven) should definitely consider watching this straight-away – there are so many parallels between the two films.

You’re probably very familiar with del Toro’s work (Pan’s Labyrinth, The Shape of Water, Hellboy) but this film sort of slipped through the cracks in terms of recognition from the public – it deserves a lot more than it got! (for example, this film isn’t even searchable on the Czech version of IMDB – what?) Set in the 1930’s during the Spanish Civil War, we are immersed in the world of a boys’ orphanage in the middle of the countryside, dealing with the hauntings of the war, but also that of what transpired on these very grounds not too long before. With themes of the paranormal and ghosts – it’s perfect for a Halloween movie but it’s actually far more than that – it’s a more complex, historical story with characters you can care about and more importantly, with heart.

Rating: 3/5 Ghosts for… well, ghosts and hauntings. This is also the only film of the crop that gave me a nightmare.

The first modern zombie flick. Zombies as we know them today. I’m not a big horror person and my Halloween movie picks usually veer towards campy-spooky but never having seen any Romero movie, I was looking forward to this one, and well, it just gets going. The zombie apocalypse is here. Needs no further introduction. I tend to enjoy dystopian or apocalypse themes set in real life or the present day – if you do too, you will enjoy this one (and will probably be shouting at your TV at the stupidity of certain characters, as one does).

Rating: 4/5 Ghosts for zombiiiies and a great opening cemetery sequence.

You may remember the trailer for this bleak, New England in the 1620’s film. A puritanical family is banished to the countryside by their village where they seek to build a new homestead and a better life in an unknown area near a dark, foreboding wood. Unfortunately, something that lives in it (you may guess from the title) is haunting their every move.

The trailer for this film looked so scary we didn’t dare watch it for years (even Stephen King has admitted that this film scared the living daylights out of him). I did not find it so scary in this way, but more disturbing than anything else. This was Eggers’ first feature-length effort and wow, what a job he did (having seen his exceptional second film The Lighthouse first, you can really see how he drew his inspiration from the history of his native New England). It’s period to a tee, no stone of authenticity was left unturned. Events and ideas for this story were actually culled by true events which occurred in the period leading up to the Salem Witch Trials. Both the story and acting is fantastic – I’d recommend it even if it wasn’t Halloween.

…and two movies which we’ll watch on October 31st…

I haven’t seen this movie since I was a teenager, but one day I was just doddering along and thought, THE LOST BOYS! Why isn’t this considered a Halloween film? Vampires? The Coreys (Haim and Feldman)? A Kiefer Sutherland that looks exactly the same as he does now? I’m looking forward to the light-hearted spooky-camp I expect this film to bring this Halloween!

Okay, so there’s no way you expected this, right? I’m not above cartoons. When I heard there was going to be a new Halloween film starring Scooby and the gang (voiced by many of the same actors as in the live-action movie), I had to get in. I am a sucker for holiday cartoons. It’s a nostalgia thing, I suppose – watching cartoons on Halloween night in glow of the orange string of lights and the TV set, Halloween candy spread out all over the floor. Something corny is always appreciated, especially this year – we need Scooby Doo’s lighthearted approach to crime-solving. Definitely worth a note is the appearance of the actual Bill Nye the Science Guy. Also, Elvira.

What will you be watching this year? If you observe it, I wish you a Happy Halloween! It’s a bit unfortunate that Halloween takes place on Saturday – the best possible party day on this year that, at least here, there shall be no partying in the traditional sense, but if you know us, you’ll know we like a good challenge.

ps, you can sift through past editions of the Spooky October Movie Series for more movie inspirado here. 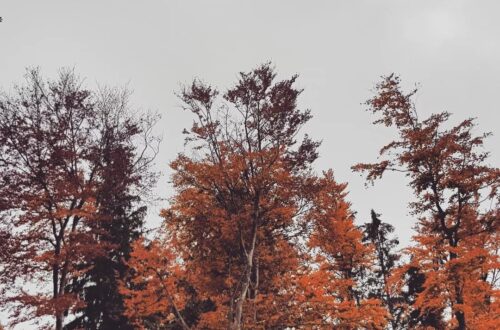