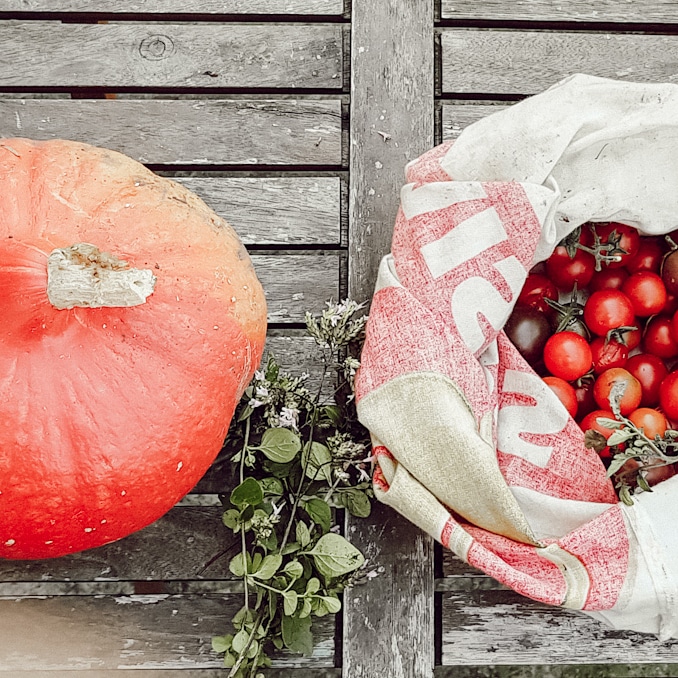 A couple of weeks ago, we had the most beautiful late October day you could ever dream of. Even now, in the late afternoon the sun is already setting, I couldn’t help think as I walked home with a basket full of vegetables from the garden plot for the second to last time this season how lucky we were this year with this beautiful Indian summer I keep raving on about — this sort of weather would even be out of place for late September, let alone October.

Readers may know that this summer was the first year I had my own garden plot in the earth to work with — a promise I made to myself to try to pursue when and if I was granted permanent residence. It has been such a great spring/summer season and I have learned so much from the experience.
I wanted to share in this post a little about my plot garden progress, generally, how it went this year, so if you’re curious about that – good news! If you’re not, bad news (I guess?).

In early May, I planted four tomato plants, Swiss chard, squash and mustard greens (komatsuna). I simply weeded the existing plot and did not supplement the soil with any compost or other organic matter.
May in Central Europe was a pretty cloudy and rainy month this year, so I spent a bit of time fretting that nothing was taking shape there, no height to my tomato plants, not much of anything to speak of. I sneaked in some potatoes at the very end of the month. All seedlings were either grown from a seed in compostable cups by me or purchased at the farmer’s market.

It was June when the sun came out in full force and the garden really blew up, so to speak. That was a huge relief.
The tomatoes shot up in height, the squash started to sprawl. My mustard greens did the best, immediately, and provided some nice greens for a good while (until the plant attracted cabbage white fly and I just yanked it out).

In early June, I planted a zucchini seedling, which as I see it now was a bit late in the season for that. I also started using a chicken fertilizer solution that month once a week as I had feared it was the soil quality to blame for May’s inactivity (it wasn’t, really), but I’m glad I used some sort of fertilizer.

The tomatoes started coming ripe in July (I planted cherry tomatoes & black tomatoes) and was able to harvest some before I left for the States later in the month. July and August were just big growing months; it became necessary to go nearly every day to water them (due to the hot sun and heat). I also realized that I learned a bit too late to pinch off the extra branches of the tomato plants before any flowers appeared, so it started growing and fruiting with a vengeance into a big bushy thing.

The Hokkaido pumpkin plant started spread across the plot and into the rest of the garden/yard space, so I began calling it “The Demagorgon”, hoping it would stop embarrassing me, or maybe just grow more pumpkins for all that fuss, for goodness sakes.

In September, the tomatoes continued ripening, however most of my plants took a big hit in August while I was gone, probably due to lack of water. I didn’t get very many gourds and the potatoes were, like the phrase goes, “small potatoes” — laughably smaller than the ones I put in there! I also attempted to sow another round of mustard greens at the beginning of the month directly into the plot, which didn’t take. The problem with the compostable seedling cups is that neighbor cats love to prowl around and dig them up! You really have to cover them so the rim of the cup is not at all visible, unfortunately.

I planted some garlic at the beginning of October (as mentioned in the Photo an Hour post) but everything has now been harvested — the last of my green tomatoes taken in before the first frost happily ripening in a paper bag on the counter — and the plot has been turned over for a winter rest in the final days of the month. All in all, the winners of the year were definitely tomatoes and chard.

So many lessons have been learned this first year of plot gardening! The book Allotment Month to Month was an absolutely perfect guide to get be going, and I can definitely recommend it to every outdoor gardener. Next year, I plan to start much earlier, directly after the last frost. The late start couldn’t be helped due to the late access to the plot. I also plan to incorporate organic matter thoroughly through the soil before planting, as I did not do this year – I’ve recently discovered the glory of using the rich compost from the garden’s pile. I will also plant a wider variety now that I’ve tested my soil’s acidity (soil test kits are available at hardware stores) and I have a better idea of what vegetables will do well in the soil.

The whole thing is a giant exercise in trial and error as I’m sure every new gardener can agree to. Already as I’m thinking about starting again in the late winter, I’m unprepared for these kinds of thoughts! Time to rest on this is necessary. I am looking forward to recharging my growing energy and I know I’ll be ready to go again at that time.

Did you keep a garden this year or grow anything? How did it go?