this week has been the most exhausting one since i’ve moved to the czech republic.  having the visa trip in the first part of the week was tiring enough as it was, and it took me literally two nights more worth of sleep to feel normal again.  even riding the city buses to my lessons this week made me think…. “i don’t want to ride another bus somewhere for a good while”.

the rule states that no more than three days after you receive your visa, you must register with the foreign police.  we were fortunate enough to have alex’s boss marketa, who is czech, along with us for this purpose. marketa leads us in front of the foreign police building in budejovice, and it seriously looks like an abandoned building.  “we’re going in here ?“ we said.  marketa replies with, ”…… have you ever read kafka?“  basically it looked like absolutely nothing had changed in this building since the 1970’s.  unfortunately, we found out that because we lived in prague when we applied for our visas, we had to go to the foreign police in prague, about two hours and ten minutes to the north.

so, we canceled some lessons (alex canceled all of his) and we took the first bus (sigh) out to foggy prague on friday morning. (i hadn’t woken up at 4:30am since starbucks but boy, after years of doing it, i’m pretty good at it)

the night before i had done some “blog research” of how it is to go to the prague foreign police.  i read remarks like, “if you don’t bring a czech speaker with you, you will have a difficult experience and saying one wrong word can give them reason to deport you”.  really uplifting stuff, i must say.  fortunately, our experience at the foreign police was NOTHING like this.  we went a half hour after they opened (smart move) and got in right away. we came prepared with a letter from marketa addressed to the foreign police (in czech) describing her intent to hire alex and myself after we receive work permits. there was almost no words exchanged between us and the officer, thankfully. the visit went off smoothly without a hitch, and we caught the 11:00 bus, earlier than we had planned, back to budejovice. (my weekend didn’t start there either– i had one more lesson at 19:00!)

bottom line: go early, go with a czech person or at least a letter from them, and moving in between the time you apply for your visa sure makes things complicated, so try not to.  also, if you travel a lot by bus in  the czech republic, it is SO worth it to get a free student agency card– you load like a starbucks card and when you use it, you get cheaper fares and the ability to cancel any trips from your mobile mere hours from departure.  one of those amazing discoveries you have to learn from a czech person.

the hardest parts are over…. we still have to register ourselves in budejovice, open czech bank accounts (definitely been putting that one off!), and figure out how to physically obtain our trade licenses, but this weekend, i breathe out a deep sigh of great relief. 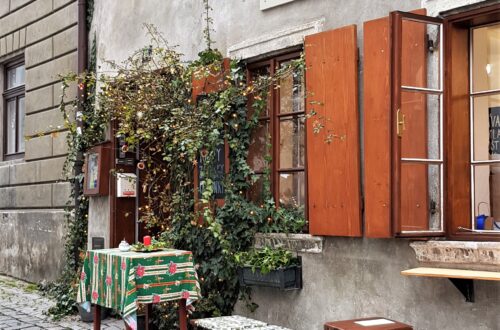 Can Český Krumlov Survive the Pandemic?